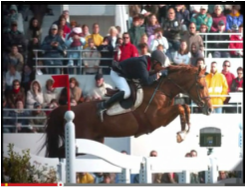 Calypso d'Herbiers, winner of La Baule 5* Derby. Selle Francais stallion. 16.2 hands, chestnut, born 1990. Calypso D'Herbiers is a beautiful stallion with remarkable gaits, suppleness, very good temperament, and the heart of a top athlete. He was the triple French champion of hunters, dressage, and jumping as a 4 year old (something no other stallion has ever achieved). He went on to a very successful career regularly placing and winning nationally and internationally including the Metz Grand Prix, the Deauville GP, the Jerez GP, the Rome Nations Cup, the Cannes GP, the Canteleu and Lyon GPs as well as the CSIO 5* La Baule Derby and Port Mort GP. He crosses well with tall, strong mares, & stamps his foals with style, outstanding gaits, energy, a good mind and suppleness. Sire of Winning Time's Fahrenheit 212 (2015 filly out of Rosalie). Video of winning La Baule Derby. Pedigree 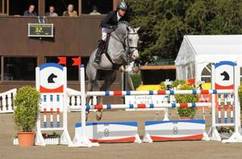 Cancara Z. 17.1 Holsteiner stallion, approved Zangersheide. Son of the outstanding stallion Cassini I, and with a dam line of great showjumping horses. Cancara Z was used as a stallion in Europe prior to arriving in the US in 2013. He has an outstanding temperament in addition to scope, talent, and modern type. He is the sire of Cascara Z born in 2016 out of Allie.
Video.  Pedigree 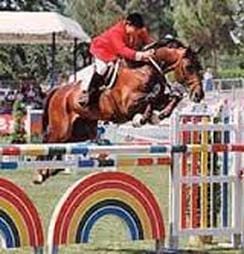 Mezcalero, Dutch WB, born 1987, 17.2 hands. Mezcalero is the son of the world-renowned Voltaire, who has gained acclaim both as a successful international competitor and as a sire of successful offspring. He represented Mexico in the 1998 World Equestrian Games, and jumped in many Nations Cup competitions under rider Frederico Fernandez. Mezcalero’s damsire is the incomparable Ramiro, who stood in Holland, Germany, Westfal, and Zangershiede, and was named Horse of the Year in Holland in 1992. A more successful sire than Ramiro is seldom seen. Mezcalero, like his father and many successful brothers and sisters, has competed and placed internationally, with appearances at such prestigious competitions as Aachen, Arnhem, Monterrey, Luxembourg, Lisbon, and Jerez, and in many world cup qualifiers. Mezcalero is the sire of the 5 Year-Old Jumper Champion in Spain, the 2002 IJF East Coast Champion, and the 2004 and 2005 YJC Western Regionals Champion Apache, and of many other successful Sporthorse offspring both here and abroad. Mezcalero is the sire of our 2015 foal Ms. PDQ  Z. Video (jumping starts at 1:50). Pedigree

Rabino, Holsteiner, born 1990. 16-3 hands (Ramiro x Calypso II x Lady Killer XX). Rabino is a son of the great Ramiro who is considered one of the most influential stallions of warmblood jumper breeding. Rabino's damsire Calypso II is also featured in a great number of today's top competitors. Rabino's most famous son is the Olympic competitor Relevantus (aka Zorro). Rabino is the sire of Winning Time's mare Rosalie, the grandsire of our 2015 filly Fahrenheit, and grandsire to our 2017 gelding Ravino. 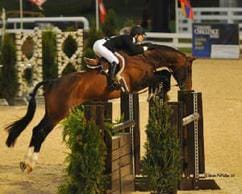 Ralando II. 16.3 Holsteiner bay stallion, approved sBs, born 1995. Ralando was a successful Grand Prix jumper and then at age 15 was purchased by an amateur and was a top AO hunter on the big A circuit. Ralando is a son of the famous stallion Ramiro who is one of the most influential stallions in warmblood jumper breeding. His damsire is Calando I, a direct son of Cor de la Bryere. Ralando II stands at Avenir Farm in Lexington, KY . Sire of Winning Time's 2014 foal Raminka. Video of handy round. Pedigree 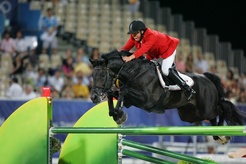 Relevantus, aka Zorro. Relevantus was 12th place at the World Equestrian Games, competed at the Beijing Olympics, and is the proverbial tall, dark, and handsome. According to Peter Wylde Relevantus was the most rideable Grand Prix horse he ever rode. Relevantus stands at Rainbow Equus. He is the sire to our 2017 gelding Ravino. 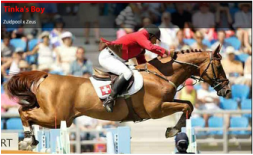 With career earnings close to 2 million dollars, Tinka's Boy, without a doubt, is the most successful 'Swiss' show jumping horse of all time and belongs to the world's best stallions. Tinka's Boy is the little athlete for whom no fence was too high. Equipped with an excellent gallop, comfortable gaits and his fighting spirit, he used his full potential on the jump. He was the winner of 26 international Grand Prix. Markus Fuchs commenting on his Dutch wonder horse: "It is a bruiser that could walk through a wall if he wanted to. But what he really wants is to jump over it." Tinka's Boy stands at Béligneux Haras in France. Sire of Winning Time's 2013 foal Tinkatolli. *Video of winning World Cup jump off*. Pedigree 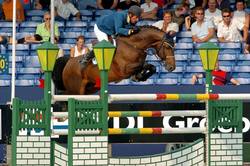 Up to Date Miltoo, BWP, 16-2 hand, bay. Born 1997. Up to Date Miltoo (Darco x Grandeur) was a highly successful international show jumper and is a proven sire of 1.6m horses. Pedigree   Video