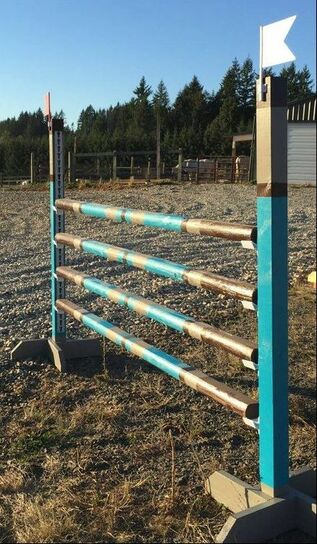 Instructions:
1. Cut the 4x4 post in half.
2. Cut the 2x6 boards into eight 18" lengths. If you want the corner cut off as shown in the photo, go ahead and do that now as well. These are notched about 3" but do it to your own aesthetic.
3. Attach the 2x6 feet to the post using screws. This is done most easily if you can lay the post on a work table or saw horse. Attach the first foot, rotate the post, attach the second foot butted up against the first, and repeat until all four feet are attached.

So then you have your pair of standards built for less than $40. Now you'll need to buy the tracks and jump cups (unless you're going with drilling the standard for old style pinned cups). We buy our tracks, cups, and flags from JumpsUsa but there are many sources. In the photo, you'll see we have tracks all the way from near the bottom of the standard to the top. We could have saved money on tracks if we had shorter standards or only put tracks where we need them (e.g., between 2' and 3'6").